Feature: 10th anniversary of the accession of the Slovak Republic to the European Union

Description: At the centre of the national side are the stylised letters ‘EÚ’, as the abbreviation of the European Union, with the coat of arms of the Slovak Republic incorporated in the foreground. On the right-hand side of the inner part of the coin, in two lines, is the date of the Slovak Republic's accession to the European Union, ‘1.5.2004’, and immediately below it the year ‘2014’. Inscribed along the bottom edge of the inner part is the name of the issuing country, ‘SLOVENSKO’, while in a semi-circle along the upper edge is the inscription ‘10. VÝROČIE VSTUPU DO EURÓPSKEJ ÚNIE’. To the lower left is the mint mark of Kremnica Mint (composed of the letters ‘MK’ between two dies), and to the lower right are the stylised letters ‘MP’, the initials of the designer, Mária Poldaufová. The coin’s outer ring bears the 12 stars of the European Union. 2€ CC France 2014 D-Day 70 years ago
2 Euro Commemorative coins is allways from original rolls. Feature: 70th anniversary of the Normandy landings of 6 June 1944 Description: In the coin’s central field...
2,95 €
I lager 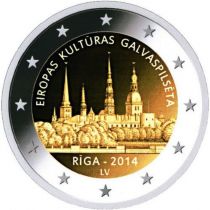